One Saturday, my dad and I grabbed all the gear we had accumulated over the past year or two and threw it in the truck to go hunting. We were both wearing camouflage shirts and pants, sprayed with nasty chemicals to keep off nasty bugs such as ticks and chiggers. We drove for about an hour to one of the ranches we were allowed to hunt on. It was a small place with dense brush and lots of water. It was a bit flooded, and there was mud everywhere.

We found pig tracks without having to look too hard. They seemed to be relatively fresh, possibly from the last night or the day before. By the looks of the land, however, we would probably not have any luck on this land without powerful lights in the dark. The brush was just too thick.

We had to wade through ankle-deep water to get back to the truck once we realized we were wasting our time. We were not particularly comfortable, our socks and shoes being filled with water, but it wasn’t so bad.

Since there was plenty of time left until nightfall, we headed to the other ranch we had access to. We had been on this one a few times before, and had seen pigs on it once. It was significantly larger, and had lots and lots of open areas, instead of just thick brush.

It did have some areas of thick growth, though, and this is where we thought the pigs might be hanging out, since it was so early. We decided to walk through there with our guns, ready for a shot.

We found a cow or two and three deer, but no pigs. We came back out into the open at about 8 p.m.

We were on the edge of the big open field we had seen pigs in a month before, and suddenly my dad said, “Whoa, there’s pigs behind you!”

There were indeed about 10 pigs behind me in the field. They were too far for a shot, though, and there was a fence between us and them. I was a little frustrated that we couldn’t reach them, but we just waited to see where they were going so we had something to go off of next time.

We watched them hurry and disappear into the thick brushline. It was a little disappointing, but now we knew where they liked to be.

We decided to walk over to the small river and see if they might be drinking from there. To do this, we skirted the edge of the field, went through the gate in the fence, and went around the other side of the field.

On our way, however, we looked behind us at the same field and saw two deer running across it. We waited for a minute, and out of the trees came two coyotes.

We ran back, but they were in no mood to mess around and kept up the same steady, fast pace across the field. They were gone.

That’s when we saw another coyote in another field across the river. This one was sitting still. We started over there slowly, trying not to scare it off, but this was not a particularly smart coyote. It gave us lots of room to move without having to be too careful.

We reached a low-hanging live oak tree and put the gun on a branch. I looked through the scope and tried to get steady, but it wasn’t a good position and I knew I wouldn’t be able to make the shot.

I looked over my shoulder and saw, in the other field, that the hogs had come back out. There was no chance for us to get a shot, though. They were about 300 yards away, we didn’t have a good rest, and the ground between us and then was completely open, giving us no cover. We would just have to let them go and get them another time.

I gave my attention back to the coyote. It was moving around a little, going a little farther away and then coming back a bit closer. We had time.

I decided to move forward to the river, as this was still a bit of a long shot. However, the ground dipped down by the river, so I tried climbing a tree. In the end, the coyote moved out of sight from my position, and I got bites from some ants on the tree.

I climbed down and started going back to the live oak when suddenly, I could see the coyote again! I had thought he was gone, but there he stood, even closer than before. I threw myself down in the grass and got my gun on him. Since it was a coyote, I didn’t take anything for granted and assumed it would be moving on very quickly after seeing us, as the dogs usually do. I took the shot very quickly.

The scope slammed into my nose, and the coyote was gone. I looked at my dad hopefully, and he said:

He wasn’t quite right, as the coyote got back up a few times and tried to run, but it died after a moment or two. I was really relieved that it was actually dead, and excited because we’d taken something off the land. It was also my first coyote.

Then came the hardest part.

It was very nearly dark, and that coyote was across a swollen river. We drove to a crossing, but even that was flooded too much to cross in the truck, as the air in the tires might float it downstream.

I tried walking across and almost fell over, but I made it in the end. Then we walked several hundred yards over to where we thought it was.

We didn’t see it, so we started to walk back and forth in a line. When we finished a line, we would move forward and do it again until we had systematically covered a square. However, that proved unnecessary as my dad found the coyote on the first scan.

Then began the  torturous, dark walk back to the truck. It wasn’t that long, but it seemed like miles uphill when I was dragging a dead coyote. It wasn’t particularly heavy, but it certainly seemed so when I had to drag it on the ground through mud and tall grass.

My arms were aching terribly by the time we reached the river crossing. I had to walk across the water with the dog, which was not easy, but I finally made it.

It was a long night for us, but it was well worth it.

I realized then that I was almost as excited about seeing hogs as I was about shooting the coyote. I thought about why and decided it was because we couldn’t eat the coyote. It would just have to go in the trash. I felt much more satisfaction with any one of my eight deer because, I think, we kept the meat. We got something out of it, and there was the slight feeling of self-reliance in a world where we rely on other people for everything. I didn’t realize that mattered so  much to me until I killed the coyote. Now I’m just even more excited for deer season to start again. 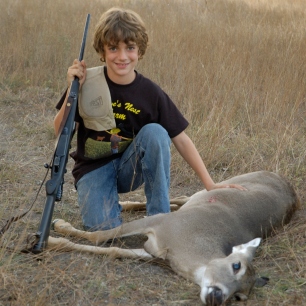 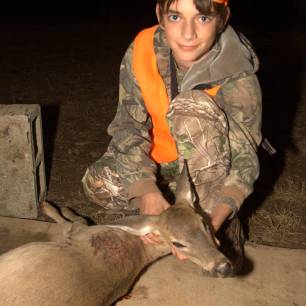